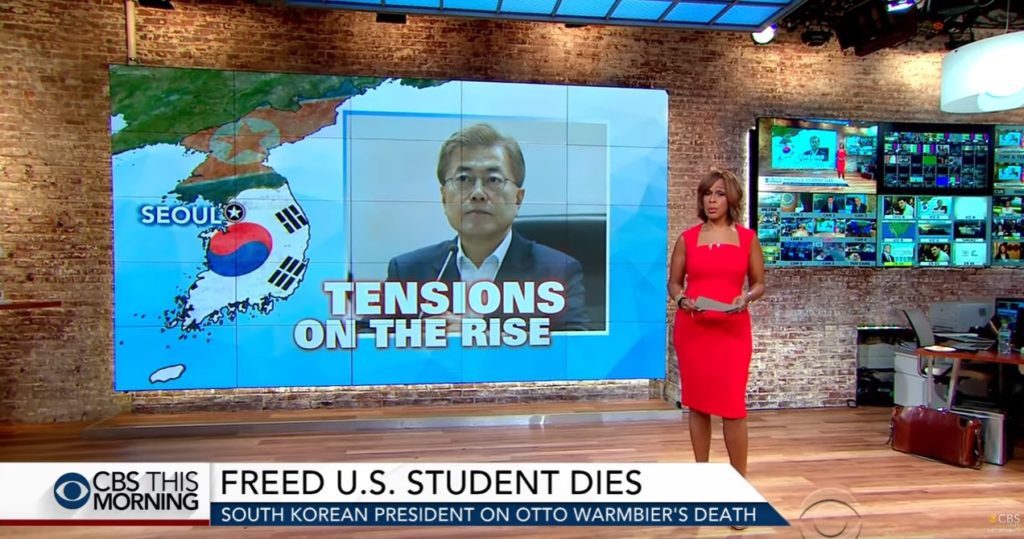 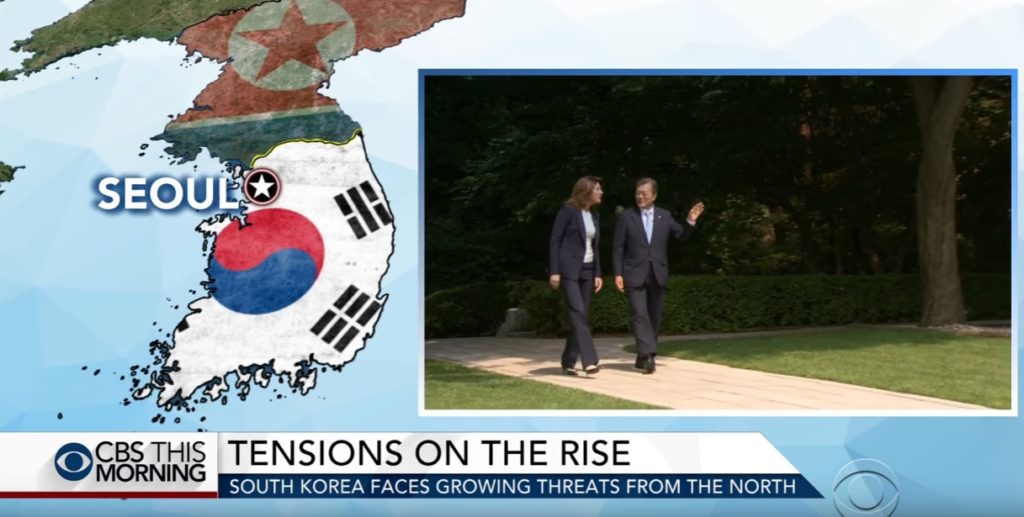 O’Donnell previews her interview with S. Korean President Moon Jae-in
South Korea’s new president, Moon Jae-in, wants to improve ties with North Korea, saying he wants to reach out after relations worsened over the North’s recent missile launches. Norah O’Donnell gives context of the situation before her interview with Moon, his first American TV interview since being elected. Watch Tuesday, June 20, on “CBS This Morning,” which airs 7 a.m. to 9 a.m. ET/PT.

O’Donnell: Sen. John McCain has said that Otto Warmbier was murdered by the Kim Jong Un regime. Do you believe the North Koreans should be held responsible for his death?

Moon: Yes… This had happened while Mr. Warmbier was in the detention of North Korean authorities. … We cannot know for sure that North Korea killed Mr. Warmbier. But I believe it is quite clear that they have a heavy responsibility in the process that led to Mr. Warmbier’s death. 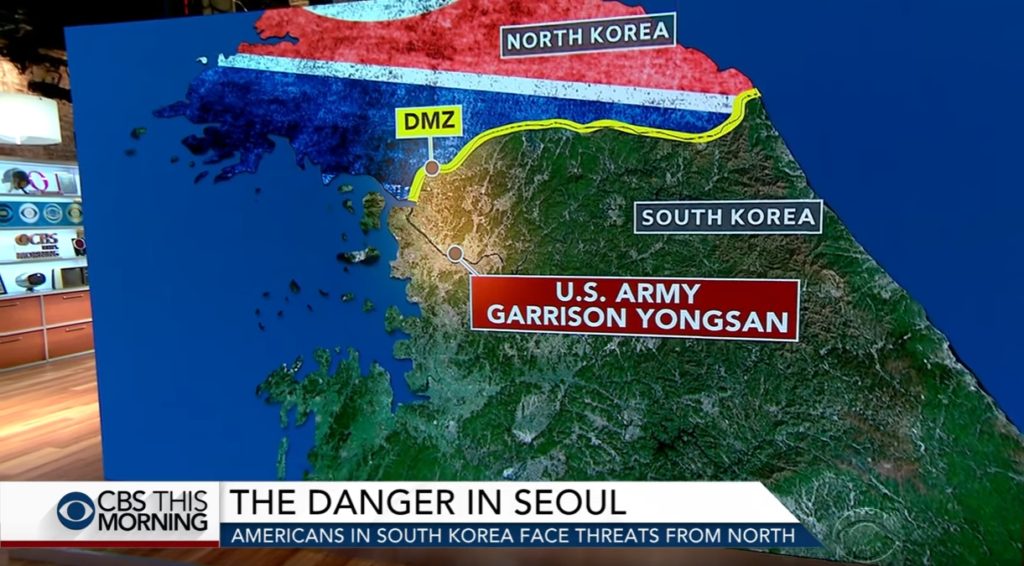 S. Korean President Moon on N. Korea, Warmbier’s death, Trump meeting
South Korea’s president is speaking out about the death of American student Otto Warmbier. Moon Jae-in is also calling for direct talks with the North Korean regime. “CBS This Morning” co-host Norah O’Donnell spoke with President Moon at his residence for his first one-on-one interview since being elected.

Norah O’Donnell: We have learned that Otto Warmbier, a 22-year-old American student, has died because of what happened to him in North Korea. What are your thoughts on his passing?

President Moon: First of all, I would like to convey my deepest condolences to the bereaved family of Mr. Otto Warmbier and the American people for the sorrow and shock they are suffering through.

Moon: We can make speculations that there were many unjust and cruel treatments to Mr. Warmbier. And I strongly condemn such cruel actions by North Korea. Even today, there are many Korean nationals and American citizens who are detained in North Korea. I also urge North Korea to return these people to their families.

O’Donnell: Sen. John McCain has said that Otto Warmbier was murdered by the Kim Jong Un regime. Do you believe the North Koreans should be held responsible for his death?

Moon: Yes… This had happened while Mr. Warmbier was in the detention of North Korean authorities. … We cannot know for sure that North Korea killed Mr. Warmbier. But I believe it is quite clear that they have a heavy responsibility in the process that led to Mr. Warmbier’s death.

O’Donnell: How does this affect your efforts to restart the dialogue with North Korea?

Moon: I believe we must now have the perception that North Korea is an irrational regime. Working with such a country, we must achieve the goal of the complete dismantlement of North Korea’s nuclear program.

O’Donnell: How do you sit knee to knee, as you promised, with an irrational leader and negotiate?

Moon: I believe that dialogue is necessary. We were unable to resolve the North Korean nuclear issue through only the sanctions and pressure.

O’Donnell: The idea of engaging in dialogue with North Koreans before they are denuclearized is fundamentally at odds with longstanding U.S. policy. So what are you going to say to President Trump when you meet with him next week?

Moon: I believe that my position is not at odds with the policy of the United States or that of President Trump. It seems to me that President Trump has criticized the failed former policies of his predecessor administrations. And on that point, I have the same view as President Trump.

Moon: I have never mentioned a dialogue with no preconditions whatsoever. I believe that first we must vie for a freeze of North Korea’s nuclear and missile programs. And then, as a second phase, try to achieve the complete dismantlement of North Korea’s nuclear program. And I believe there are voices supporting such a step-by-step approach even within the United States.

O’Donnell: President Trump has called Kim Jong Un a madman with nuclear weapons. Do you believe that he is a madman? And why do you wanna talk to a madman?

O’Donnell: Do you believe that Kim Jong Un likes burgers?

Moon: So I believe what Kim Jong Un would want the most is to have a security guarantee for his regime. So there is a possibility that Kim Jong Un continues to make the bluff with his nuclear weapons programs. But deep inside he is actually yearning or wanting dialogue. But in the end the only way to find out is to have a dialogue with North Korea.

O’Donnell: Let me ask you, it is the view of U.S. intelligence that North Korea will likely test an ICBM this year. Would you oppose a preemptive strike by the United States to take that out before the test?

Moon: I believe when it comes to North Korea’s nuclear missile threats, it is the Republic of Korea that is more dire. For the United States the North Korean threat is a future threat on the horizon. But for us this is a matter of life and death. When it comes to preemptive strike that you mentioned I believe that this is something we may– we can discuss at a later stage when the threat has become even more urgent.

O’Donnell: So, is that your message for President Trump when you meet with him at the White House?

Moon: So I believe that we will probably have such discussions. The two of us will be both in office and working together for the next five years. And the two of us also share the common goals of resolving the North Korean nuclear issue, establishing a peace regime on the Korean Peninsula, and building peace and security in northeast Asia. So, if the two of us could pull together and accomplish these common goals then I believe that this will be the most fruitful achievements that we can achieve during our terms in office. And I also believe that this will be the greatest diplomatic achievements for President Trump as well.

O’Donnell: You believe that his greatest diplomatic achievement will be what happens here on the Korean peninsula?

Moon: Yes, that is because President Trump has mentioned that North Korea was on the top of his priority list. And also because this is something that all of the former U.S. administrations could not achieve. And so, I highly commend President Trump’s placing such great importance on the North Korean nuclear issue, and I also believe that thanks to President Trump’s approach and attitude, there is a possibility of resolving this issue.

O’Donnell: You have promised to sit knee to knee, head to head, with the North Korean dictator. Can you go to Pyongyang this year? Can you meet with him this year?

Moon: I certainly hope that the conditions could become right for such dialogue before the end of the year. And just because we believe that dialogue is necessary does not mean that we have be impatient for dialog. And so what I hope to achieve by the end of this year is to draw North Korea out to the table for negotiation through the implementation of various and strong sanctions and pressure.

O’Donnell: You have laid out very ambitious goals… How can you achieve what others have been unable to achieve?

Moon: There was a time when we got very close to achieving that goal… This is not my unilateral initiative. This is also an initiative that had been pursued by the United States in the past.

O’Donnell: And you will President Trump to renew that?

Moon: If I have the opportunity, yes. 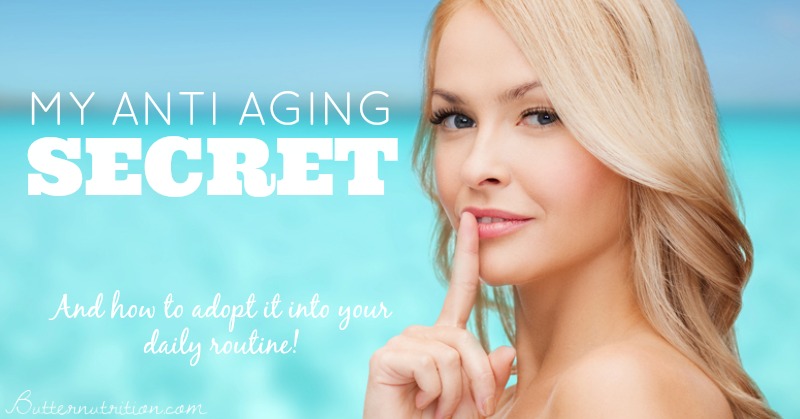